The second meeting of the French Citrix User Group Community has just ended and I’d like to share the most important thing about the “Citrix Community”. 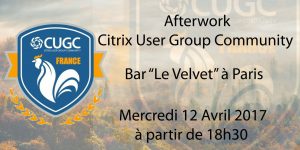 This edition was limited to 50 attendees in order to try a new concept: Let’s talk about Citrix! 2 hours of Geek Speak with 3 topics:

The event was sold out and the ‘no show’ percentage is low so we still think that there is a lot of people who want to talk about Citrix technologies.

Every single topic has been discussed and here is a sum up:

The new Citrix strategy is to focus on cloud but, for now, it’s a bit too early for the French market. It sounds that we are “late/slow adopters” when it comes to new solutions. During the discussion, we notice that it’s easier for Sharefile or XenMobile to be adopted as a cloud solution because of the context of the product. Going to the cloud for XenApp for example is more difficult as a lot of application back end are still on-prem.

My favorite topic as there is a lot of discussion around it!

there is still a difference between FMA and IMA in term of functionality. Depending to the FMA version we are talking about, the difference is becoming more and more acceptable and, as a consequence, a lot of customers are migrating to FMA.

The back of the “LHC” seems to be limited to “small infrastructure” where SQL high availability costs are too expensive. For those customers, one of the solution is to go to the Citrix Cloud where the infrastructure part is managed by Citrix.

As there was partners and customers we can say that for both the information is not crystal clear! The value of Select (the new name of SM) is not visible. As a quick poll we ask the attendees the level of the last Citrix support ticket. Here is a sum up:

With these points, it’s hard to convince the customer to pay more. We hope that the efforts Citrix is doing in the support part will pay.

As already said, the community is awesome, this 2 hours’ discussion around free giant cocktails and beer thanks to our sponsor Activlan. When it comes to community, there is no more competitors, we are just there to enjoy and share our knowledge. As a proof, two “competitors” 😊 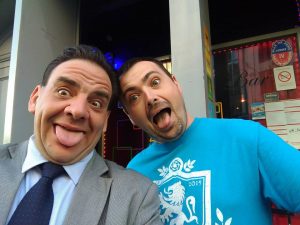 After the event a part of the group choose to go for an improvised dinner. Stephane THIRION decided to go to a metal music place called “Black Dog”. It was a good introduction to the metal world: they have huge Argentine steak! Thanks to Florian LAMBERT and Nutanix for this dinner